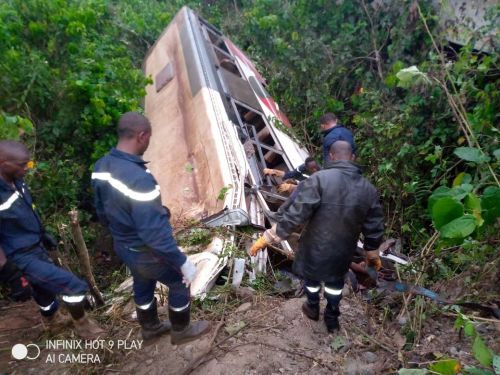 The prefect of the department of Mbam-et-Inoubou reported an accident that occurred yesterday Dec 27 at around 2 am on the Yaoundé-Bafoussam road, “Pont de Nomale”. At least 37 lost their lives during this tragedy.

According to the gendarmerie, the accident happened when a wide-body Mercedes car, registered under the number LT130 IQ, lost control due to over speeding and hit a truck. The driver died. The Mercedes car, which belongs to the interurban transport company Avenir-voyages, then skidded over about 100 m, flew over the stream and hit the embankment on the other side.

The gendarmerie also explained that “a few moments later, the second bus of Avenir-Voyage, coming like the first one from Foumban to Yaoundé, also ended up in a ravine. The driver of this second bus did not know what was going on as no signage was made to warn of a possible danger. Thank God he succeeded in dodging the crowd.”

The Yaoundé-Bafoussam axis, linking the country's capital to the capital of the Western Region, is one of the most accident-prone in Cameroon due in particular to the narrowness of the road and its poor condition.

Currently, rehabilitation work is being carried out there in preparation for the African Cup of Nations (CAN) in 2022. While waiting for the end of the work, traffic on this axis presents many risks. Transporters are traveling at high speed.

The recent report on the evaluation of road safety performance in Cameroon produced by the Economic Commission for Europe and the United Nations Economic Commission for Africa indicates that, overall, 3.64% of accidents in interurban areas during the period 2008-2014 are due to environmental causes, 15.39% to mechanical causes (related to the poor condition of vehicles), and 80.97% to human causes.

Pedestrians (human causes): 3.60%; dangerous overtaking: 3.15%; defective tires: 2.80%; dangerous maneuvers on the road: 2.34%; poor road conditions: 2.20%. The causes of accidents related to driver inattention and distraction, as well as those related to drivers' lack of control are often associated with drinking and driving.

Estimates made as part of the study for the Development of the National Strategy for Road Prevention and Safety (2009) show the economic losses incurred by Cameroon as a result of road accidents at nearly CFA100 billion per year, equivalent to 1% of GDP for this period.

Compared to the development emergencies that Cameroon is facing, these losses represent, in terms of lost reinvestment, the equivalent of 10,000 classrooms equipped (in two twin rooms) with an average of CFA 20 million per year to cover most of the country's needs in classrooms in two years; more than 250 kilometers of paved roads built at an average of CFA40 billion per 100 kilometers that are sacrificed each year; eight reference hospitals with an average investment of CFA12.5 billion each year for equipment, enough to equip all regions of the country with reference hospitals in two years.