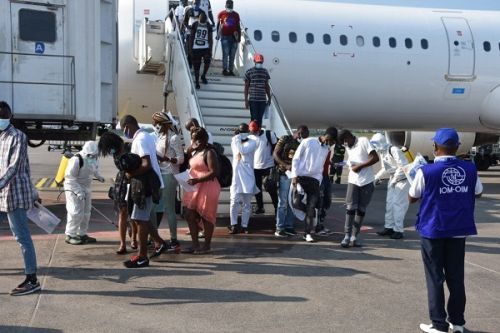 Cameroonian President Paul Biya approved the disbursement of CFA125 million to facilitate the voluntary return of 630 Cameroonians in an irregular situation in Equatorial Guinea.  The announcement was made by Désiré Jean Claude Owono Menguele, the ambassador of Cameroon.

Indeed, E. Guinea is currently conducting control operations and expulsions of foreigners in an irregular situation on its territory. An Ethiopian Airlines flight from Malabo, the capital of Equatorial Guinea, landed on Monday, October 31, at Douala International Airport with 52 Cameroonians on board, according to Crtv. “Similar repatriation operations are planned in the coming days," the Cameroonian envoy said.

Equatorial Guinea has launched, since October 20, an operation to control the residence permits of expatriates living on its territory. As a prelude to this operation, the Equatorial Guinean government asked people who found themselves concerned by the measure to comply by August 31, 2022, or leave the country voluntarily.

On October 17, Désiré Jean Claude Owono Menguele issued a statement asking Cameroonians who wish to leave E. Guinea to present themselves at the embassy. Some 630 people have expressed their desire to return to Cameroon, and the list has been transmitted to the authorities of the host country.

Inter-ministerial consultations were then initiated by the Cameroonian government, in partnership with the International Organization for Migration (IOM), to organize this return, the ambassador explained. SBBC has learned that 31 Cameroonians (26 men and 5 women) are currently detained at the Malabo Multisports Complex, as part of the ongoing residence permit control operation. The embassy assures that it is supporting them in terms of food and necessities. "The Cameroonian government is following the current situation very closely," the official said.