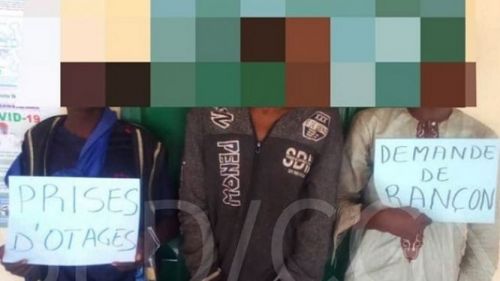 Gendarmerie dismantles gang of alleged hostage-takers in the North region

Five alleged hostage-takers have just been put out of action in the northern region. According to the national gendarmerie, two members of the gang were "neutralized" during a search with vigilance committees in the Touroua district, Benue department. The other three were apprehended and presented to the press on Friday, April 29.

The National Gendarmerie reports that "during the night of 28 to 29 April 2022 around midnight, five individuals, including one with an Ak47 type weapon of war and three with hunting weapons and a machete, broke into the village of Sekehi, in the Touroua district, and took hostage five people between the ages of 15 and 31.

The gendarmes were alerted, and with the help of the vigilance committees of Touroua, Tcheboa, and Tsorke, they found the alleged kidnappers in the mountain area. "The result is that two alleged criminals, aged 23, were neutralized, an Ak47 type weapon was recovered, as well as a box-loader and 16 rounds of 7.62 caliber ammunition. The five hostages were released and handed over to their respective families," said the gendarmerie.

The three others are Ibrahima Mohamadou, 40, Gambo Hamissou, 30, and Mohaman Dairou, AKA Rebo, 25.

In the North, Adamaoua, and Far North regions, hostage-taking for ransom is a recurrent phenomenon. Authorities have increased the number of military posts, particularly those of the Rapid Intervention Battalion (BIR), an elite army unit to keep the situation under control. In addition, the government supports vigilance committees made up of civilians who protect their villages.