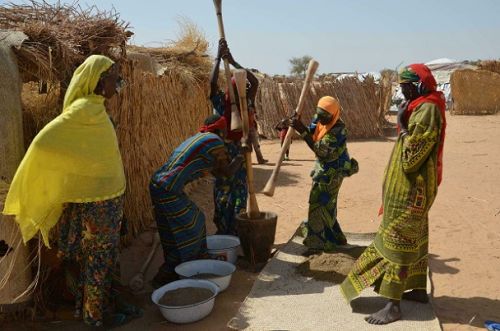 The UN Office for the Coordination of Humanitarian Affairs (OCHA) provided a snapshot of humanitarian needs in the Lake Chad basin. According to the body, more than 10 million people are in need of humanitarian aid in the region, mainly due to Boko Haram attacks.

They are from the countries bordering this great lake, namely Cameroon, Nigeria, Chad and Niger. More than one million are identified in Cameroon and a little more than 8 million in Nigeria. "After 12 years of violence, basic social services and already limited natural resources are under pressure; 5.1 million people are food insecure - the worst increase in four years - and 400,000 children are severely malnourished, 1,050 schools are closed in the Lake Chad Basin, depriving thousands of children of an education while 2.8 million people are internally displaced, with 2 million of them in Nigeria alone," the report says.

The UN identifies more than 340,000 IDPs in Cameroon, more than 2 million in Nigeria, 400,000 in Chad and 70,000 in Niger. "Violence continues to spread, with 55 security incidents recorded in 2021, resulting in 202 deaths," the document says, estimating that more than $2 billion is needed to assist people. "However, after nearly three quarters of the year, only 31% of the necessary funds have been received," the UN said.

To discuss the issue, Yaoundé has been hosting since yesterday October 4 a two-day forum of Lake Chad Basin Governors for Regional Cooperation on Stabilization, Peacebuilding and Development. The workshop gathers the governors of the Far North and North regions of Cameroon, the governor of the Diffa region in Niger, the governors of Borno, Adamawa and Yobe states in Nigeria, as well as those of the Hadjer Lamis and Lake provinces in Chad.