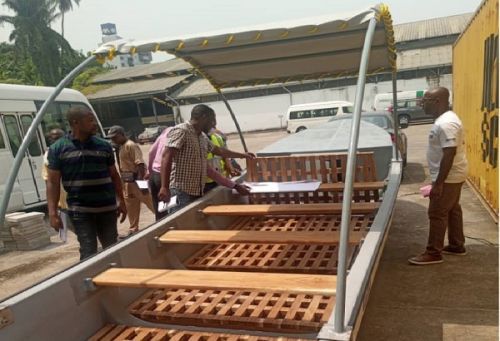 The governor of the Littoral region, the national coordinator of the National Participatory Development Program (PNDP), and the director of the French Development Agency (AFD) in Cameroon officially launched two 75 hp motorized canoes in Manoka. The ceremony took place today April 13.

The two machines were acquired by the district commune of Douala VI, thanks to financing from AFD's Debt Reduction and Development Contract (C2D III) with technical assistance from the PNDP. The project required an investment of more than CFA46 million.

According to PNDP, these two dugout canoes will “contribute to improving the transport conditions of the staff and other administrative authorities of the Douala VI district commune.” They are the direct beneficiaries of this project. The goal is to reduce the rate of absenteeism of the staff of the town hall in this island commune.

This will increase the district’s tax base and allow for the transportation of staff in improved safety conditions. The project will also benefit the local population, which is 5,464 inhabitants of Manoka Island, according to an estimate made by the PNDP.