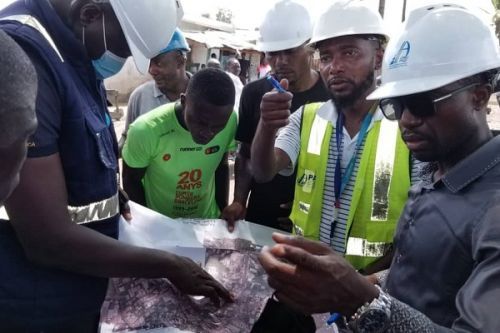 In the coming days, the Port Authority of Douala PAD will offer 8-month rents and a relocation package to illegal occupants it will soon drive out of the port’s public domain. According to a release published on July 9, 2021, this is the port authority’s social support to the concerned parties.

In the said release, the PAD invites the inter-agency committee in charge of freeing the illegally occupied port domain to urgently confirm the list of the parties to be driven out.

The social support is being announced just months after an inter-ministerial mission sojourned in Douala, from February 8 to 12, 2021, at the Prime Minister’s request. This mission aimed to find solutions to the disputes caused by the demarcation of the Port of Douala-Bonabéri’s boundaries.

Indeed, in the framework of its project to build two bypass roads and parking spaces to reduce congestion inside the port, the PAD started demolishing buildings and identifying people illegally residing in the port domain. As the port spans over 1,000 hectares, part of its domain is illegally occupied and also some local communities are disputing part of it. Also, some unauthorized authorities have allocated part of the domain to some parties.

Faced with the PAD’s decision to prepare its project, the illegal occupants request compensation for investments already made in those domains. As for the local communities, the Bell canton namely, they demanded compensations by invoking their customary rights on the port domain.