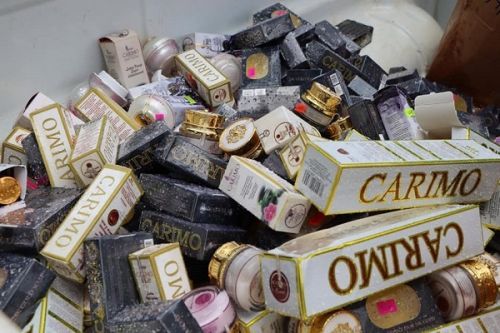 The Cameroonian Ministry of Health (Minsanté) has announced a strengthening of measures against fake medicines and skin whitening products on the national territory. As part of this campaign, the health department has made a seizure of such products in the Mokolo market, one of the largest shopping areas in Yaoundé.

The operation was done with the support of the national gendarmerie. It is currently underway in the Central, Eastern, Littoral, and Western regions, and is expected to soon be extended to other regions. The objective is to withdraw illicit and harmful products from markets and raise awareness of their dangers to protect the population.

"We want everyone to know that the use of fake products causes a lot of damage on health, economic, social, and security levels. We have recently witnessed a resurgence of liver, heart, and kidney failures. Many cases of intoxications and cardiovascular accidents have also been reported,” said the inspector general of pharmaceutical services and laboratories at Minsanté, Solange Kouakap.

In 2019, the Minister of Public Health, Manaouda Malachie, conducted an unannounced raid at the Mokolo market and other commercial spaces in the capital to discuss with the sellers of street drugs, before the crackdown. "It's been three years now and the habits have not changed. So, we went down this morning to stop to street drugs and dangerous cosmetics," he said in a video posted Monday, September 12 on Minsanté’s official Facebook page.

"We want them to know that the measures will now be very severe. We are determined to eradicate this scourge," said the President of the National Order of Pharmacists of Cameroon (ONPC), Franck Nana. This campaign follows Minsanté's decision to ban the import, manufacture, and distribution of certain substances used in cosmetic and personal hygiene products. These are hydroquinone and its derivatives, mercury, and its derivatives, and corticoids.

The advertising and marketing of these products are also prohibited, according to the ministerial decision of August 19. The substances, according to health professionals, are harmful to health and are the cause of diseases on the rise such as diabetes, cancer, and high blood pressure. On September 2, Manaouda Malachie made public the list of food supplements, diet drinks, and breast milk substitutes that have been "authorized for human consumption" in Cameroon. He took the opportunity to invite the promoters and distributors of the "unapproved" products to comply with the regulations in force, under penalty of sanctions.