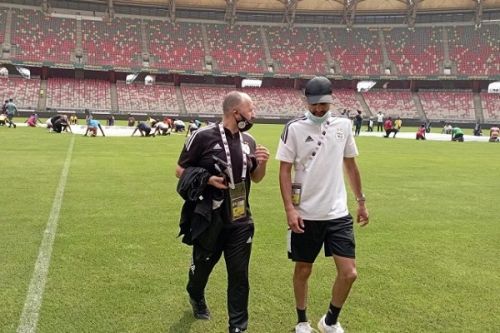 On January 18, 2022, Samuel Dieudonné Ivaha Diboua, governor of the Littoral and chairman of the local AFCON2021 organization committee, carried out a working visit to the Japoma stadium. This visit follows recent voices criticizing the sports infrastructure, which hosts the matches of Group E, because of the quality of its turf.

"There is nothing wrong with the Japoma stadium. As you can see behind me, Gregogi, the company in charge of its maintenance is at work. Like any international stadium, after several games, it is normal for technicians to review the state of the turf. Next Thursday, we will host the Algeria-Côte d'Ivoire match without stress," said the administrative authority in a video posted on the Facebook page of state media CRTV.

"The playing ground will be OK" by Thursday, assures Abel Calvin Ndjoké, coordinator of the Japoma stadium. "Specialists started maintaining it last Sunday. This is because of the current climatic conditions that do not facilitate the quick growth of the lawn. A new technique has been applied now,” he said when interviewed.

Pictures showing people maintaining the lawn are currently circulating on social media. In this video posted on Youtube, technicians can be seen patching impact points on the pitch.

On Sunday, Djamel Belmadi, coach of the Algerian national football team, said that the pitch of the Japoma Stadium was not the best for a competition of the scale of the African Cup of Nations.

"I am not saying that it is in a dire state. What I’m saying is that it does not allow fluidity and is not in a state expected for major tournaments like the African Cup of Nations,” he said in statements reported by media.

A mere pretense to justify failure?

For some people, the Algerian coach is just trying to justify the poor performance of his team since the beginning of the AFCON by blaming it on the state of the turf.

Last Sunday, Algeria, which is the current champion, lost a match against Equatorial Guinea (0-1). On January 11, it recorded just a draw against Sierra Leone (0-0).

"How to explain the defeat of Algeria against Equatorial Guinea? Algerians claim it is due to the poor state of the turf. The problem here is that they are the only ones to complain about it. The turf cannot make you fail to score a free kick or a penalty.  When North Africans play in Central Africa, they complain about everything: the heat, the wind, the sun, the crowd. They don’t give the best of themselves because they are busy finding excuses," said Joseph Antoine Bell, in his review of the AFCON2021 on RFI last Monday.

Côte d'Ivoire, which also played its first matches in this stadium, did not complain about the quality of the turf.  "The pitch of the Japoma stadium is cool! We have seen worse during some AFCONs, but this stadium is very beautiful. It is a very beautiful infrastructure," said Patrice Beaumelle, coach of the Ivorian football team, during a pre-match conference.

Next Thursday, Algeria will face Côte d'Ivoire, which is for the time being the leader of Group E with four points. The Algerian team is the last with just one point, so they must win this match to expect to make it to the round of 16.