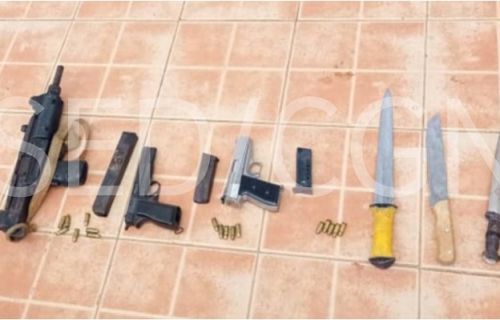 The Mfoundi Territorial Gendarmerie Group reported last October 17 that it has dismantled two gangs of alleged thugs, "all foreigners", in Yaoundé.

"We achieved this thanks to intelligence gathering and collaboration with the population. The first gang, made up of six foreigners, four of whom are still on the loose, was dismantled on September 23 in the Odja neighborhood. We caught two gang members while they were trying to snatch a motorcycle from its owner," the national gendarmerie reports. The thieves confessed they have already stolen CFA41 million from victims.

The second gang consisted of four people, two of whom are on the loose. “They specialize in attacking citizens leaving banks or ATMs. We arrested two gang members on September 29 during a robbery in the Biyem-Assi neighborhood,” the defense force said. The gendarmerie also seized two automatic pistols, a machine gun, ammunition, and three knives.