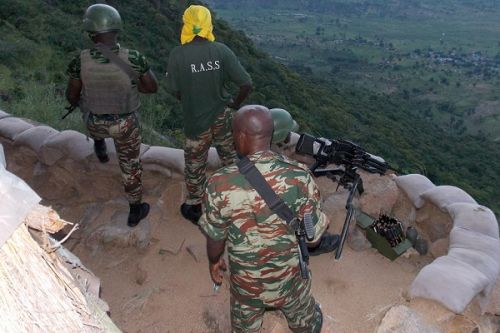 The Military Tribunal of Yaoundé recently pronounced its verdict on the case of the murder of women and children in Zeleved, Far North Cameroon. At the end of the hearing on September 21, 2020, five Cameroonian soldiers were convicted.

Three were found guilty of "murder and violation of orders" and sentenced to 10 years imprisonment each. They are Sergeant Cyriaque Bityala and First Class soldiers Jean Baptiste Tchanga Chiengang and Barnabas Donossou Gorvo.

One army captain (Captain Étienne Fabassou) was also sentenced to 10 years imprisonment for "complicity to murder and violation of orders.”

Private Ghislain Landry Ntientche who shot the video of the execution was not sentenced for murder but for “violation of orders” and got away with two years imprisonment.

Me Sylvestre Meng, one of the defense lawyers, indicated that he will appeal this sentence in a case that raised much uproar.

In July 2018, a video surfaced on social media showing soldiers summarily executing two blindfolded women, a girl, and a baby being carried on the back of one of the executed women.

The video shot in  Zeleved (in the Far North, where Cameroonian soldiers are fighting jihadists) went viral causing a public uproar from human rights organizations both nationally and internationally.

At first, the government denied the Cameroonian army’s involvement in these barbaric acts, arresting seven suspects, two of whom were acquitted in August 2020. The acquitted suspects are Corporals Didier Jeannot Godwe Mana and Jonathan Manasse Djakobei.

The soldiers killed their victims because they were suspected of collaborating with the terrorist group Boko Haram, which has committed numerous exactions against the army and the populations in this northern region of Cameroon.

Let’s not that in February 2020, three Cameroonian soldiers were charged with the murder of civilians (including children) in Ngarbuh, a village in the North-West region. This killing also raised a public uproar. To shed light on the killings, the president of the republic ordered an independent investigation which led to the arrest of the suspected soldiers.