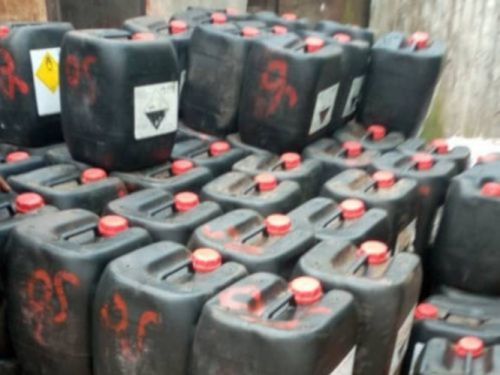 Customs seizes 2,000 L of a chemical substance used in the manufacture of IEDs

The leaders of Halt Illegal Trade Operation (Halcomi3), a special unit of the Directorate General of Customs (DGD) dedicated to the fight against smuggling, intercepted 100 20-liter cans each containing nitric acid, a total of 2000 liters, on December 20, 2020, in Douala.

On November 27, Halcomi had seized 300 liters of hydrogen peroxide in the economic capital, a chemical substance that, like the first, is used in the manufacture of Improvised Explosive Devices (IEDs).

Last August 27 also, 207 IEDs originating from Nigeria and weighing a total of 2,070 kg were seized in the Northern region, specifically in Pakete, a village in the commune of Garoua I in the department of Benue.

"This is the largest seizure of IEDs in Cameroon," said the DGD, adding that on the instructions of the Governor of the Region, Jean Abate Edi'i, "the defense forces have tested and confirmed the extreme dangerousness of these explosives.”

A few months earlier, the customs services had seized in the northern part of the country "300 liters of "tchoukourdaye," a solution used in the manufacture of those devices.

These operations undoubtedly prompted the Secretary of State for Defense in charge of the gendarmerie (SED), Galax Etoga, in a note dated June 24, to draw the attention of the commanders of the 10 gendarmerie legions to "the threat of terrorist attacks in major cities and towns."

Since then, some cities such as Yaoundé, Douala, and Bamenda have recorded several attacks perpetrated with IEDs. Although these attacks have not claimed any deaths, they have nevertheless led the government to strengthen security on the country's various roads and controls in major cities.