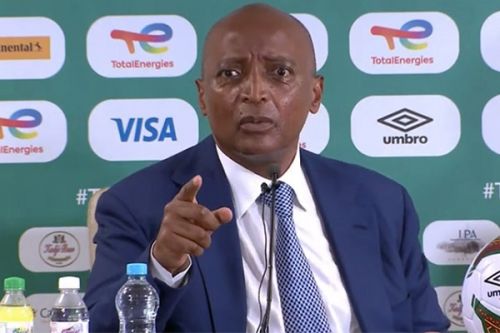 By Friday 27, 2022, the Confederation of African Football (CAF) hopes the Cameroonian authorities’ investigation report concerning the stampede, that officially claimed the lives of eight people and injured 38 on Monday, January 24, will be ready.

CAF President Patrice Motsepe (photo) conveyed this information during a press conference organized the day after the tragedy, live on about thirty channels worldwide.

According to sources within the CAF, the pressure put on the host country of the 33rd edition of the African Cup of Nations (CAN) by the African soccer governing body is the result of the actions of TotalEnergies, the main partner of the competition. In a press release issued on January 25, the French company called on the Confederation of African Football (CAF) to enhance the security arrangements in the stadiums.

“Safety is a cardinal value for TotalEnergies, and the Company, through the Confederation of African Football, is currently examining the resources deployed alongside the authorities to ensure a safe and welcoming environment for supporters as the tournament continues,” the release it issued reads.

The release clearly shows the sponsor’s fear of the consequences this tragic event could have on its image.

It even took precautionary measures to protect itself. "Given the circumstances, TotalEnergies is showing its solidarity by suspending all planned activations and promotions inside and around the stadiums at the present time," the multinational informed.

A crisis meeting between CAF and the local organizing committee is scheduled today to clear everyone’s responsibility in that sad event.