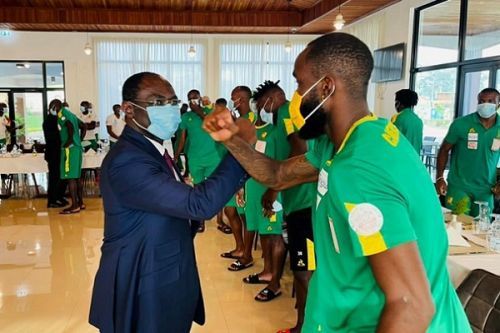 The Minister of Sports and Physical Education (Minsep), Narcisse Mouelle Kombi, announced today, January 27, that the government has released the qualification bonus to players.

"Upon request from the Ministry of Sports and Physical Education, the Indomitable Lions have received (...) this Tuesday, January 25 (...) their qualification bonuses," said the minister after a visit to the national team players who will face the Gambia on January 29.

A few days ago, after the match against Cape Verde (1-1), Samuel Eto'o, president of the Cameroon Football Federation (Fecafoot) promised that the players’ bonuses would be fully paid. He even jokingly added that the players would receive their bonuses even if it means bankrupting the federation.

According to a bonus grid unveiled by state media CRTV, the attendance bonus for every player is XAF450,000, while the participation bonus is XAF30 million and the bonus for qualification for the round of 16 is XAF15 million. Qualification to the quarter-final also entitles each player to a XAF9 million bonus.

If the players pass the semifinal stage, the bonus for every one of them will be XAF10 million and in case they win the final, the bonus is XAF30 million for each of them.

Qualification and attendance bonuses have always been the bone of contention between players and the soccer administration. In 2014, for instance, before going for the World Cup in Brazil, players initiated protests demanding the payment of all the bonuses before they leave Cameroon.