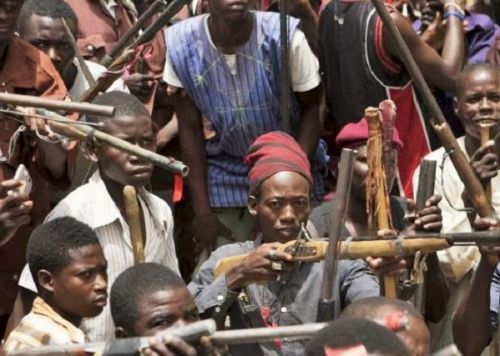 Anglophone crisis: over a dozen Ambazonian arm dealers to be extradited by Nigeria

The said separatists include Lambert Hasam, leader of the terrorist group Black Bamba, arrested with his band in possession of explosive devices powerful enough to blast anything in a 1-kilometer radius.

Lambert Hasam, born from a Nigerien father and a Cameroonian mother, was described by The Guardian Post as a notorious arms dealer who brought weapons and explosive devices into Cameroon by hiding them in oil drums. For Klein Reporters, he is probably one of the leaders of the armed separatist bands that committed the highest number of horrific crimes.

According to the media, in 2017, Lambert Hasam had been forcing several Cameroonians to seek refuge in Nigeria.  For some time, he assisted them thanks to an NGO and later forced them to combat regular security forces in Cameroon.

In 2018, Lambert Hasam escaped a raid carried out by the Cameroonian army, which managed to arrest several of his gang members. Released thanks to a presidential decree at the end of the Major National Dialogue organized in late 2019, most of them joined Hasam again to combat the regular army.

The extradition possibilities are pointed by the media just months after the end of the 8th Cross Border Security Commission held in Abuja, during which Cameroon and Nigeria agreed to take common resolutions to combat insecurity at their shared borders.