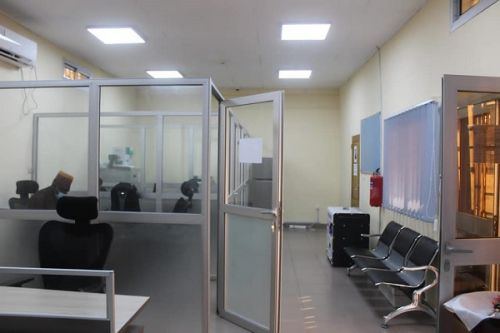 On Friday 26 March, Cameroon inaugurated its first polio response coordination center. It is located at the Mobile Hygiene in Messa district, Yaoundé. According to the Ministry of Public Health, the premises hosting the center was "renovated, refurbished and equipped with the help of partners." It consists of a conference room, four offices, and working facilities (videoconference equipment, data management server, etc.).

Placed under the Public Health Emergency Operations Coordination Center, it is aimed at maintaining the wild poliovirus-free status the country acquired in June 2020 and end the circulation of all forms of polio in Cameroon.

Although the so-called "wild" polioviruses have been eradicated in Cameroon, other forms of type 2 poliovirus derived from a vaccine strain are still circulating in the country.

These very rare polioviruses circulate primarily in areas where children have received little or no immunization and can also cause paralysis. Therefore, in addition to monitoring the circulation of the virus in Cameroon, the new center will ensure that at least 95% immunization coverage has been achieved during each immunization campaign as well as 80% routine immunization coverage for inactivated polio vaccine, which is a requirement for maintaining wild polio-free status.

The center is inaugurated in a context marked by reports (since 2019) of polio cases in the Far North, East, Littoral, South, and Central regions. On February 22, 2021, after two cases of type 2 poliovirus were discovered in Cité Verte, the Minister of Public Health (Minsanté), Manaouda Malachie, announced the resurgence of the polio epidemic in Yaoundé.

As a reminder, poliomyelitis is a highly contagious disease caused by a virus that invades the nervous system and can lead to total paralysis in a few hours. It mainly affects children under 5 and in one case out of 200, irreversible paralysis (of the legs in general) occurs; 5 to 10% of the paralyzed patients die when their respiratory muscles stop working, explains the World Health Organization (WHO). Currently, there is no treatment protocol and vaccination remains the best way to protect against the virus.