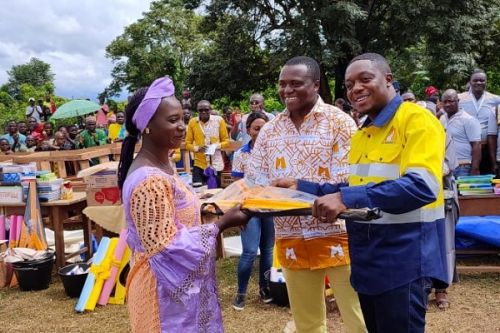 Cameroon’s national mining company Sonamines plans to school 300 children this year thanks to its “Zero children in mines” initiative. Last year, when the campaign was launched, 153 children were enrolled at the public school of Kambélé, a mining town in the Kadey department, East region.

This year, some public schools in Bétaré-Oya and Colomine, two localities in the Lom-et-Djérem department, will join the movement.  As part of this plan, MD Serge Hervé Boyogueno and Blaise Moussa, the Board Chairman, have donated materials to schools in the targeted regions. The aim is to end child labor on mining sites. Indeed, Sonamines has identified more than 800 children working in the mines in 2021.

"Child labor on mining sites deprives them of schooling and jeopardizes their normal school path. They are often forced to leave school or are forced to combine school attendance with long hours of work on the sites. These children often fall behind their peers academically or become illiterate,” Sonamines deplores, stressing that this activity is "one of the worst forms" of child labor and that it is detrimental to the health and safety of children, as well as to their physical, intellectual and cognitive development.

The "Zero children in mine" operation is based on a set of measures to support schooling and literacy (enrollment of children in school, donations of textbooks and school supplies, provision of schools with materials, the partial subsidy of the allowances of some parents' teachers...).