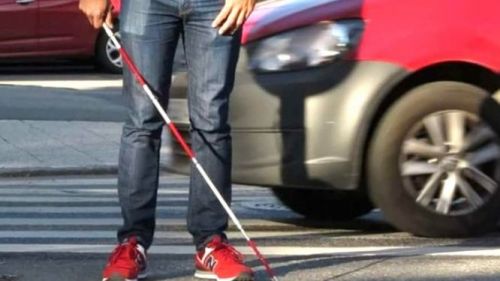 Does a red and white cane mean the holder is deafblind?

A WhatsApp message explains that such canes indicate that the holders have eye and hearing problems. True?

Since yesterday, an image is being shared on Whatsapp informing that "when a blind person holds a cane laced with red bands, the person holding it is not only blind but also has hearing problems. This is true as a video posted on BBC the social on September 11, 2016, explains.

The same information was confirmed last July 24, in a tweet (by an Argentine journalist) retweeted 98,000 times. In the tweet published in Spanish, textually translated gives this: “So? What does a red cane mean? It means that the one using it, apart from eye problems, also has hearing problems. This is important to know in order to help them. It is also important to share”.

Indeed, this is not yet known by everyone. In an article titled “Red and White Canes – and persons with deafblindness”, the World Federation of the DeafBlind wrote : “White canes are well known as a symbol of people who are blind and/or visually impaired in most countries. But the white cane only tell other people that holders have visual disability which is not enough for us with Deafblindness.

In order to attract others that holders are persons with Deafblindness, they started to put red strips or tape on the white cane as symbol for deafblindness in more and more countries.

In some countries this symbol is already recognized well, but in some other countries, we still need to work on it to get recognition by people in the general public and Authorities. Anyhow, the red and white canes are out there”.