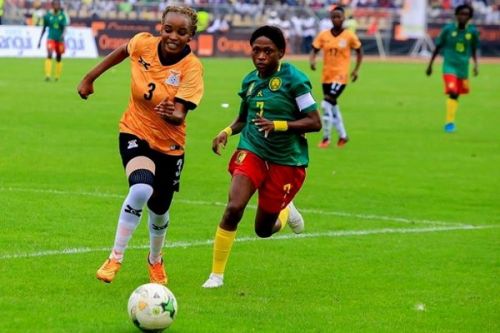 Following a first game last March 5 in Yaoundé when they beat the Zambian team 3-2, Cameroon’s female football team did not get the same luck, losing 2-1 for the second round held March 10 in Lusaka. The only goal scored by the Cameroonian team during this last round of qualifying for the Tokyo 2020 Olympics Games is not enough to qualify.

“It's difficult to lose the game 2-1, it's the goals scored away that eliminated us because, in both games, we are even with 4 goals,” reacted Alain Djeumfa, the coach of the women's national team, in a short video published by the Cameroonian Football Federation (Fécafoot) on its social media pages (Facebook and Twitter). Cameroon will, therefore, have to beat Chile, losers in the South American zone, in April for a final chance of qualification.

“We're going to work very hard to get out of it,” the coach promises. According to Alain Djeumfa, Zambia's victory, which qualifies for the Olympics, was achieved thanks to “boys whose presence was felt during the game due to their frame.” After the first match at Ahmadou Ahidjo Stadium last week, the coach of the Cameroonian team accused the Zambian team of having male players.

“The difference was also made with the boys who are in this team, let's admit it:  number 11 (Barbara Banda) and number 20 (Rachel Nachula). It was hard to face them because they are more male than female,” he said.

Alain Djeumfa called on the Fédération Internationale de Football Association (FIFA) and the Confederation of African Football (CAF) to look into the matter. A victory against Chile will mean Cameroon will be competing in the Olympics for the second time after the 2012 edition in London, England.