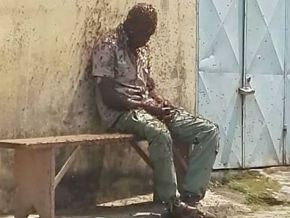 The man attacked by bees has died!

It is said that the man attacked by bees did not survive. True?

Cité des palmiers area in Douala witnessed a gruesome scene on November 29, 2017. A man, attacked by a swarm of bees, left his car and sat on a bench motionless. He remained there, head down; cellphones’ flashes or the screams of the stunned residents did not disturb his calm. Alerted, the fire brigade delivered him from the swarm with some kind of torch and took him to the general hospital located not so far from there, where he died.

According to documents found inside his car, he used to teach at the university. Some people think that it is witchcraft-related incident as a similar scene occurred in Uganda recently.

Indeed, a man, attacked by a swarm of bees, went through Masindi, in Uganda, in order to return back stuff he had stolen previously…

Video of the rescuing operation :