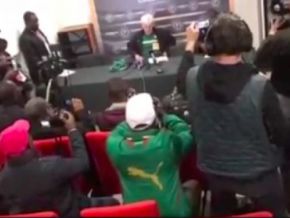 Were the Indomitable Lions turned away at the restaurant of a Brussels hotel for unpaid bills?

Is it true that they played their friendly match against Guinea on empty stomachs?

Since yesterday, comments against the Cameroonian Federation of Football (Fécafoot) have been flying on social networks. Some cannot believe that last Tuesday in Brussels (Belgium), the Indomitable Lions played their friendly match against Guinea on empty stomachs. Which is however true according to the video of the press conference given the day after he Lions were defeated (2-1), by the manager of the national football team.

“[…] this midday when we went for lunch, the hotel personnel refused because the hotel had not been paid so we did not eat at lunchtime”, Hugo Broos calmly explained. “Look, I am a person who likes to work in professional conditions. In every sense, people are trying to make impossible for me to work, which is not normal”, he added, visibly exasperated. Fécafoot immediately reacted, considering the outcry generated by these declarations.

“This situation which led to these comments from Mr BROOS is UNACCEPTABLE”, one can read from Laurence Fotso, in charge of Communication for the Federation. “We have the trust of the Government, the Executive Committee will not anything or anybody prevent its actions and the implementation of its vision”, she repeated on the official Facebook page of the organisation.

Immediately afterwards, she came back with another announcement. We learned that “Alioum Alhadji, 1st Vice-President: ‘an investigation was opened’ – [on the situation which led to Mr #Broos’ declarations]”.

Promises which do not particularly reassure the public, shocked by the revelations of laxity and corruption denounced by the Manager of the Lions.