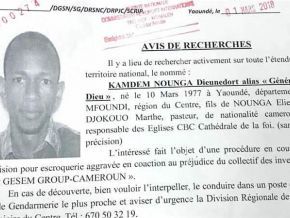 Is it true that Dieunedort Kamdem is actively sought after by Cameroon’s police?

Even though he is actively sought by the criminal police in Cameroon for fraud, the pastor is peacefully pursuing his activities in Canada.

On June 14, 2017, rumors claimed that Kamdem Nounga Dieunedort had been arrested because he promoted the services of Gesem Forex Trading based in Côte d'Ivoire. At the time, the leading pastor of CBC cathédrale de la foi who had not been arrested said to stopblablacam that he had been fooled by an Ivorian pastor who promised to grow his followers’ money. He said that Gesem Forex Trading also extorted CFA10 million from him as well as his followers’ money which is CFA40 million.

Since March 1, 2018, Dieunedort Kamdem has been actively sought after in Cameroon for this case. The wanted notice issued by the head of the Centre criminal division explains that it is an open serious fraud case opened in co-action with the collective of Gesem Group- Cameroun’s investors.

Gesem Forex Trading Cameroun, the investment company involved in the case, is a subsidiary of Gesem Group whose central administration is in Côte d'Ivoire. Before the fraud rumors sparked, it was present in Yaoundé and Douala and had launched a fundraising and investment campaign. In June 2017, 300 people had already subscribed.

In the same month, Cameroon’s financial markets commission warned people not to invest in this company.

Nowadays, Pastor Dieunedort Kamdem, called “Général de Dieu” lives in Canada for “family and social” reasons, according to his posts on Facebook. He pursues his ministry there. By the way, from March 8 to 11, 2018, he will organize a “restoration crusade” at his new church in Rosemont-la petite, Montréal.