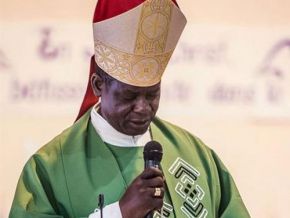 Did the criminal investigation for Mgr. Jean-Marie Benoît Bala’s death confirm a suicide?

In a recent press release, the prosecutor of the Yaoundé Central Court said the criminal investigation launched to determine the cause of death of Monsignor Bala concluded that the Bafia priest died by drowning. This is according to the report of autopsy by forensic doctors.

To support the verdict, the attorney, Jean Fils Ntamack, emphasized that the autopsy was carried out by a team of experts of France-based Interpol (International Criminal Police Organization). Autopsy report states: “The body shows no evidence of physical aggression, we thus confirm drowning”. Though its report has not been published, it should be noted that a first autopsy was conducted before Interpol’s, by local doctors.

Based on Interpol’s report, and the prosecutor’s press release, the suicide theory is more likely. Both documents go against the Cameroonian clergy’s claims dating from last June 14.

Indeed, after Mgr. Bala disappeared last May 30 only for his body to be recovered three days later from the Sanaga River, the national clergy maintained firmly that he was murdered. “In sight of the first observations, we, the clergy of Cameroon, affirm that Mgr. Jean-Marie Benoît Bala did not commit a suicide; he was brutally murdered. This is just another murder, the one too many”.

It is very likely that the clergy will not leave the case at that.