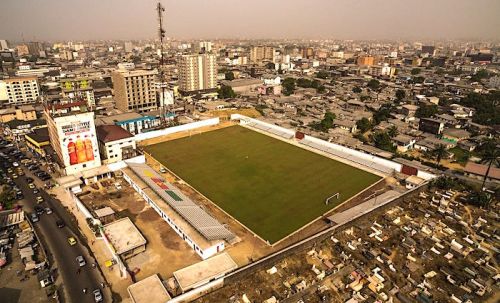 Yes, this picture is really the aerial view of Mbappè Leppé stadium

It is said that the extensively shared picture is the aerial view of the Mbappè Leppé stadium in Yaoundé. True?

Yes, this picture really shows the shiny state of Mbappè Leppé stadium, named after the renowned Cameroonian midfielder who died in 1985. This picture was taken by Yves Rostand Tamu, a 25 year old photographer specialized in drone image shooting.

In the picture, well-known sites like the post in Akwa-Bonadibong and the cemetery of Bonadibong (at the right of the stadium) are seen. On the other side of the road, some buildings of the John Bosco school near Douala Cathedral are seen.

Mbappè Leppè stadium is so shiny because it is one of the stadiums renovated in the framework of the AFCON2019 that Cameroon should have hosted. The renovation works for this 60 year old stadium was launched in August 2017 and was to last two years.