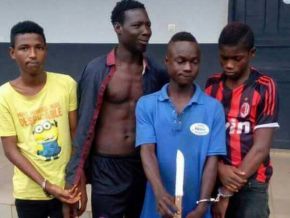 Are those people on the picture, the murderers of Foumban high school’s headmaster?

Some people claim that they are Charles Etoundi’s murderers arrested this weekend in Western Cameroon. True?

This image of four thug-looking young men went round internet this weekend. The users who shared the picture stated that those young men were the murderer of Charles Etoundi, headmaster of the Foumban bilingual high-school. He was stabbed to death on September 23, 2017, by intruders who got into his house.

Admittedly, the image depicts thugs but those thugs operated in Côte-d’Ivoire, not Cameroon. The picture is the cover-image of an article, on the Ivorian news website “Fraternité Matin”, which reported that “police forces arrested four young criminals, coming from Abidjan, in Abengourou on Friday, October, 6, 2017”. The website revealed that the gang used to cause havoc in Abengourou. 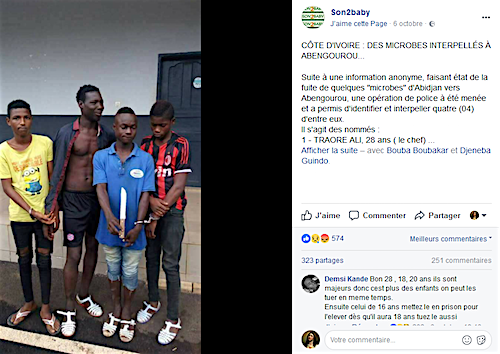 They are Traoré Ali, 28 years-old, identified as the gang’s leader, Diallo Junior Ahmed, 18 years old, Atté Koffi François, 20 years old and Sangaré Fousseni aged 16. In Côte d’Ivoire, they are called “microbes”. According to France 24, the term “refers to gangs of youngsters and teenagers which emerged between 2010-2011, during the post-election crisis, and multiplied attacks of a rare level of violence in Cote d’Ivoire’s economic capital”.