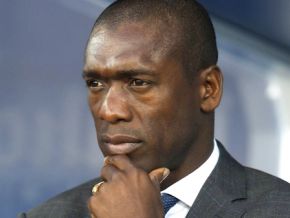 Clarence Seedorf is leaving Cameroon’s football team. This is the current rumor spreading on social media. People said he is about to step down as Lions indomptables’ coach to join Real Madrid in Spain. Well we find out this is truly a fake news. “The matter of Clarence’s departure is not mentioned by Fecafoot. Priority is all about the Cameroon VS Comoros game to be played on March 23. The coach has already revealed the 30 shortlisted players but the 23 selected are yet to be known. Now if Real Madrid wants to take Seedorf, we cannot unfortunately resist them,” Fecafoot sources said.

The 42-year-old former Dutch international player is one of the names cited by the Spanish media to replace Santiago Solari, the current Real Madrid coach whose future with the club already seems clear after Casa Blanca's defeat last week against Ajax in Amsterdam (1-4). Seedorf would thus act as “a transitional solution, being an interim until the end of the season,” said Le Figaro. Clarence Seedorf, appointed coach of Cameroon’s team on August 4, 2018 for a four-year term, has not yet made any official statement on the subject.

Being a former Real Madrid player where they won the Champions League in 1998, he has never denied his ambition to become the club’s coach someday. “Coaching Real Madrid would be like coming back home. I already had a similar experience when I was coach of Ac Milan, the feeling would be similar,” Clarence told a Spanish newspaper. For the moment, the Dutch coach seems focused on the 2019 African Cup of Nations (AFCON) scheduled for next June in Egypt.

“Our ambition is to win the AFCON. Everyone wants to win. There will be major competitors such as Egypt, Morocco and Senegal. As far as we're concerned, we can aim high. We are the outgoing champions,” he said in an interview with Talents d'Afrique on Canal+ on March 1.

Second in Group B behind Morocco, Cameroon will face the Comoros on March 23rd in Yaoundé for the 6th day of the 2019 Can qualifiers. The list of players called for this match is expected to be released this week. Sources said, the coach is expected in Yaoundé on 16 March.