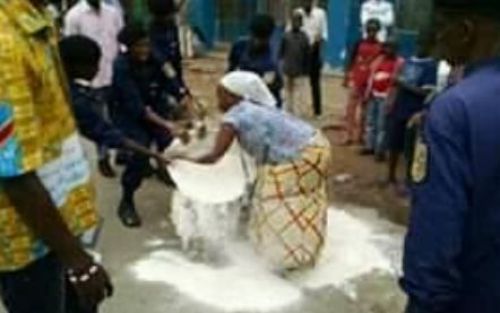 No, this scene was not in Cameroon

It is said that Cameroonian police violated a woman to take her cassava flour from her. Is it true?

Around 12 :38 PM, on February 13, 2019, an internet user published an image depicting a woman fighting with policemen on a Facebook group well-known by Cameroonians. In the picture, the woman is trying to stop policemen from taking a basin (filled with what looked like cassava flour) from her. During the fight, part of the content is spilled and the woman finally lays on the basin.

These pictures are captioned with the text : “seriously, I pity my Cameroonians. Policemen are brutalising this poor woman, mother of five children, and spilling her goods on the ground just because she didn’t pay the daily CFA500 tax…”

Unlike what the text claims, this did not happen in Cameroon but in the democratic republic of Congo. The first publications on that matter were published a year ago, on February 4, 2018, to be precise.

At the time Michael Tshibangu‏ , a Congolese, published it on Twitter to report policemen’s  "wanton violence" and lack of compassion.

The images were later published on Facebook, later that day on pages like "Rumeurs d’Abidjan" and, the following days, they were published on Youtube and other websites with additional details. It was said that the woman was violated because she refused to pay the daily CFA500 tax.

Some tips like the democratic republic of Congo’s flag and the policemen’s uniform indicate that the scene happened there.

Currently, the post published yesterday is not available but, it was made amid tensions between the Yaoundé city police, traders and motorbike taxi drivers.

Last Friday, a video showing a car of the town police being stoned by traders of Yaoundé central market went viral on Facebook. About a week later, on February 13, 2019, violent fights happened in Elig Edzoa, Yaoundé, following the supposed death of a motorbike taxi driver during a violent fight with the city police. That day, Jean-Claude Tsila, prefect of the central region issued a decision halting the activities of the city police of Yaoundé and neighbouring communities.