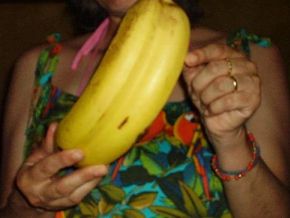 No, a woman who eats conjoined bananas will not give birth to Siamese twins

In some Cameroonian cultures, it is said that a woman who eats conjoined bananas could give birth to Siamese twins. For real ?

In some Cameroonian cultures, girls are warned not to eat conjoined bananas if they don’t want to give birth to Siamese twins. This belief is widespread in the Bassa culture notably but, it is more myth than fact.

According to doctors, Siamese is the result of a genetic defect. Therefore, it has nothing to do with the consumption of a particular fruit or food.

Siamese are twins that were unable to completely separate themselves in their mother’s womb because of a monozygotic cell’s development problem. "In fact, it is an incomplete division of the cell during mitosis," explains Camille Abel Afan, a human reproduction specialist.

"The babies are born linked by part of their bodies. It can be the head or the belly. Most of the times, they are glued by their belly," a gynaecologist explains.

Even though it is known that siamese has nothing to do with witchcraft, let’s note that science has no explanation for this problem yet.

Siamese twins are rare but, some have been born in Cameroon. There are about 200,000 around the world.