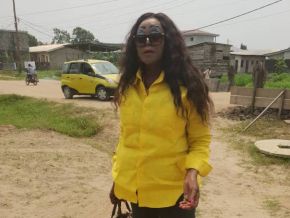 Pictures of Nguea Laroute, commonly called Mama Nguea, are currently being shared on social media suggesting the singer is on her deathbed. Indeed, because of the crazy make-up the singer wore on some pictures posted on the official Facebook page of Aubin Sandio (Aubino Records), arranger, programmer and music producer, internet users said that she seems to be sick.

The make-up gives her a “waxy complexion”, or even “cadaveric”, they say. “She must be severely ill,” some wrote. And quickly the rumor spread, suggesting Mama Nguea is dying.

A rumor that the singer denied. “So I'm dying and I leave the studio? People should think a bit. I am very well,” she said when joined on the telephone. The interpreter of “Soleil de décembre” acknowledges that she is the lady in the pics, especially the one where she poses alongside Toto Guillaume. “I'm the one in these pictures. We just left the studio that day (Monday, February 18, 2019, Editor's note), we were tired. I entered the studio around 4:00 p. m. and left at 10:00 p. m. Toto Guillaume asked us to take some souvenirs. Aubin filmed me in the studio, which is not well lit. Besides, it was hot. Now people say I’m sick and that I'm going to die,” the soon to be 60 singer said.

“It's true that I’m diabetic but I deal with it. I'm in great shape,” she stressed. She has been diabetic for 15 years now.  She doesn’t believe it’s her make-up that makes people talk. “It has nothing to do with the picture. I'm currently in the studio with Toto Guillaume and they're upset about it. It's not just anyone who works with Toto Guillaume. One, he is expensive. Two, he doesn't work with just anyone. If you can’t sing, he doesn't work with you,” Nguea said in a Facebook live on Wednesday, February 20, 2019. The Facebook live was on the page of Yolande Bodiong, main presenter of K-Tapult show, a local talk show that introduces Cameroonian and African celebrities.

Nguea Laroute is currently working on her next album. One of the tracks, arranged by Toto Guillaume, should be released at the end of March 2019. “Too bad for the jealous people who don’t want me to progress, God alone decides. It doesn’t make sense to get up in the morning and say nonsensical things on social networks,” concludes Mama Nguea, known in particular for her extravagant make-up. A make-up reserved for the “stars”, she keeps claiming.