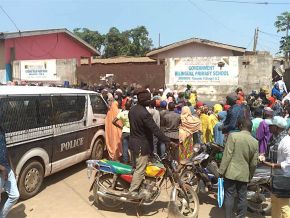 Did children die in a stampede at Ekoudou school in Yaoundé?

It is said that some pupils died during a stampede within the school. True?

That morning there was a performance in one classroom. To see the play, students had to pay CFA100. Those who could not afford it had to watch it through the windows and there were hundreds.

At the middle of the play, an overseer came with his cane. That is when all hell broke lose and the poor children tried to escape. According to the parents’ posts on social media and statements on TV, some students are injured but the number of children who died could not be determined for sure. According to credible sources, there were five deaths but some others claim that there is more. This is not the end of the case so, stay tuned!