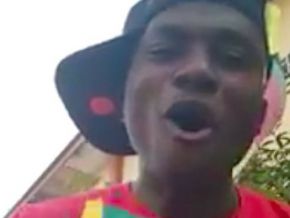 Has this video been done by a priest?

It is said that this rather hilarious version of Cameroon’s anthem is made by an abbot. True?

During the weekend, a video (viewed more than 53,000 times) on which Abbot Etienne Bakaba vulgarily mimic the national anthem by describing the polemic around the ignorance of Miss Cameroon 2017, has been extensively shared.

Contacted, Etienne Bakaba ironically admits: “yes, that is me in the video, not a lunatic”.

In the video, the priest is seen cap on the sideway and wearing a t-shirt. His look reminds of a rapper but, he is 34 years old Catholic priest ordained in 2009 (at 25).

He has decided to talk to the youth is a language they understand. The said video is, of course, funny but, the author lashed at corruption and theft.

Currently, the priest is studying journalism at Yaoundé Ecole supérieure des sciences et techniques de l’information et de la communication (ESSTIC). As a student, he is not posted at a specific parish. He lodges at the national episcopal conference of Cameroon (Conférence épiscopale nationale du Cameroun- CENC) in Mvolyé.

This singer and songwriter is well known for his gospel, the album titled “Alleluia Masee” (hymn of joy).