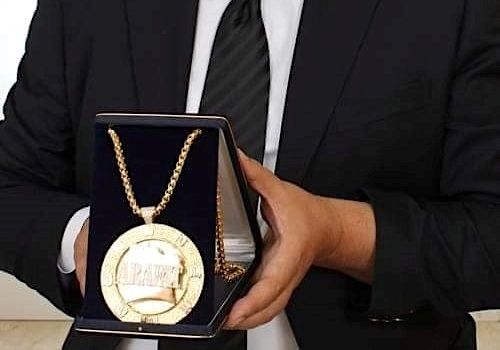 No, Dj Arafat has not been immortalized by the UNESCO

According to a Facebook post, the late singer has been bestowed the prestigious title of the best singer of the last ten years by the UNESCO. Is it true?

A Facebook post published on a page well-known by Cameroonians claims that Dj Arafat was “immortalized” by the UNESCO after his demise. The post claims that Dj Arafat has entered the UNESCO’s annals of immortals alongside Nelson Mandela, Fredrico Mayor, Yasser Arafat, Sylvio Berlusconi and many others with the title of the best singer of the last 10 years and best DJ of his generation.

The post is illustrated with two pictures; one of a medallion on which "DjArafat" can be seen in capital letters and the other showing a white man holding the medallion. This man is supposedly an executive at the UNESCO. However, this is fake news.

Sources at the UNESCO Yaounde indicate that the institution does not have such recognition.  “We have other recognitions like goodwill ambassador,” the sources said.

The only action initiated by the institution due to the Ivorian singer’s death is a condolence published on the Bureau UNESCO Abidjan on its Facebook page on August 13, 2019.

In fact, the medallion is a renowned hairstylist Garo Hasbanian’s tribute to DJ Arafat. By the way, he is the white man seen on the second picture of the post. He reveals that the project was initiated two months ago (before the singer’s death) and that the medallion is not made of pure gold. “The copper that constitute its base has a thickness of 150 mm and weighs 250 g,” he explains adding that “the embedded zirconia chain is an imitation of diamonds.”

The medallion “is constituted of 461 units placed one by one over the name Dj Arafat. Côte d’Ivoire’s map revolves like roulette or a clock. The 8 ‘DJ’s around the medallion represent the eight important cities in the country,” Garo Hasbanian said.

“This medallion is an artwork médaillon,”  the hairstylist who says he has known the singer since his childhood, concluded.