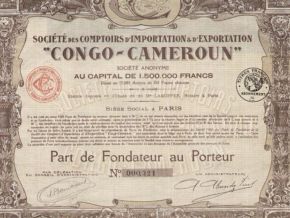 No, the securities dematerialization process has not been suspended in Cameroon

The process of securities dematerialization has never been suspended in Cameroon, according to a statement by Richard Evina Obam, MD of the Autonomous Depreciation Fund (CAA) who is charged with the conservation, coordination, control and supervision of dematerialization operations in Cameroon.

In a press release published on September 4, the manager stated that several issuing companies and their shareholders have fulfilled their legal obligations under the dematerialization process. “With regards to companies that do not comply with requirements, they are invited to get in line as the process and the remuneration of the related services continue unimpeded, and no contrary indication has been made, either by the Financial Markets Commission, responsible for regulating the process, or by the CAA”, he said.

This process, which does not affect the principle of ownership anonymity for shares and other securities, consists in substituting their physical holding by an immaterial conservation, represented by a registration in an account opened in the name of the owner, and maintained either by the issuing company or its agent for registered securities, or by an approved custodian account holder for bearer securities.