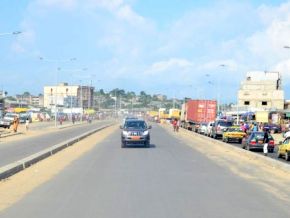 Yes, trucks are forbidden from moving along the Eastern entrance road of Douala at set times

This prohibition took effect on August 5 and will end on August 31.

Trucks are now forbidden from moving along the eastern entrance road of Douala during set period of times. This will reduce jams because of the ongoing construction. Indeed, to travel along the 10 kilometers road, users had to spend 6 hours because of the long traffic jams.

Sceptics are still doubting the prohibition but, this is true. On August 5, 2019, Joseph Bertrand Mache, prefect of the Wouri, signed a decree according to which from August 5 to 31, 2019, (could be extended later) the circulation of trucks on the Eastern entrance road of Douala is prohibited from 5 am to 9 pm.

The prefect indicates that priority is given to official escorts, construction cars, police and security cars as well as ambulances along the nationale n°3.