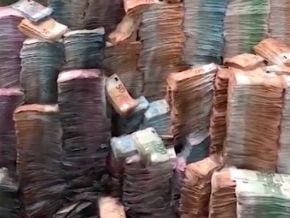 No, former minister Edgard Alain Mebe Bgo'o’s wife hasn't burnt a pile of cash to prevent them from being discovered by the police

According to social media posts, Bernadette Mebe Ngo’o burnt banknotes to prevent them from being discovered by the police during a raid at her house. Is it true?

A video is being extensively commented on, on social media. The video shows a room where what looks like half-burnt banknotes can be seen and internet users claim that the said bank notes had been burnt by Bernadette Mebe Ngo’o, wife of former minister Edgard Alain Mebe Ngo’o.

The couple is being investigated for embezzlement and, according to the rumor, this is the reason miss Mebe Ngo’o tried to burn those banknotes because their house was to be searched by the police. This is a pure lie.

Police sources reveal that she was always watched by the police since March 5, 2019, when her husband was placed in police custody. The sources also indicate that the Ngo’o’s house has already been raided twice but no half-burnt banknotes were discovered.

Another source who watched the video thinks that it was not shot in Cameroon. "The banknotes do not look like CFA francs and it does not look genuine," the source said.

The fact-checking department of French media France 24 had checked the video by doing a reverse search using InVid. It also did extensive research on Yandex search engine and found it on the instagram account of Alejandro Monge, a Spanish artist.

“This video was shot by a visitor during ‘Art Madrid’ in February 2018. Baptized ‘European Dream’, it is the work of Spanish artist Alejandro Monge and is a 3-meter high sculpture presented in the 3punts art gallery in Madrid. None of those banknotes is genuine,” the fact-checking department explained.