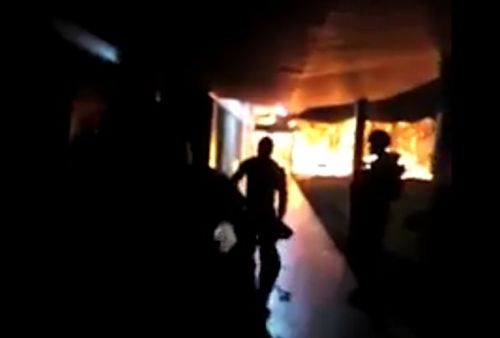 No, the Cameroonian army did not set fire to Kumba hospital

A short video of 45 seconds seen thousands of times on Facebook accuses the Cameroonian army of setting fire to the Kumba district hospital in the southwest, a region that has been plagued by the Anglophone crisis since late 2016. “This is irrefutable proof that it was Biya's army that set fire to Kumba District Hospital,” the ones who uploaded this video on February 11, 2019 said. But the government formally denied this affirmation.

"The Kumba district hospital in the southwest region was devastated by a major fire on the night of February 10-11, 2019 ; a fire caused by a gang of about 20 secessionists,” a statement by the Minister of Communications (Mincom) René Emmanuel Sadi, released last Monday said.

According to the document, the assailants entered the health staff’s residences and main hospital departments, including medicine, surgery and the operating theatre, “burning down in total all the buildings housing these essential units” of the Kumba district hospital.

“Once alerted, the administrative authorities of the southwest went to the scene and took all appropriate measures to secure the patients, transferring them to other hospitals in the city of Kumba,” the statement said.

In the video, visibly taken with a mobile phone, there is no evidence of the Cameroonian army setting fire to the said hospital facility. We see a part of the building being consumed by the flames and there were armed men difficult to distinguish because of the ambient darkness. Rather, it seems as if they were trying to save what could still be saved.

“Watch out !” one of them shouted in French. The fire killed 4 including two patients who were burned alive on their hospital beds. Seven health workers' vehicles were set on fire and the hospital was almost completely burned down.

The government condemns “these unspeakable atrocities and barbaric acts of extreme cruelty” and assures that “every effort will be made to guarantee the safety of people and property, as well as the return to peace in the North West and South West regions.”