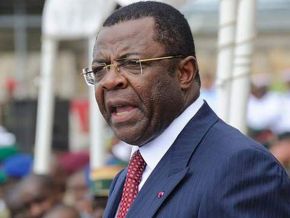 Ex-Defense Minister, Egdar Alain Mebe Ngo’o, has been on the rumors’ spotlight since he was jailed March 8 at the Kondengui central prison of Yaoundé. Some say he attempted suicide after his wife joined him in the same prison. They even went further saying the minister was reportedly found lying in his own blood “after cutting a vein in his left hand.” He was rushed to the hospital of Yaoundé and is currently in a third degree coma, according to the authors of the news.

This is nothing but fake news ; so is the rumor of his alleged assault by former ministers detained in Kondengui, the prison director said. “The minister is calm. He arrived affected like everyone else who enters here under the same conditions,” said Frédy Armand Medjo, in comments reported by the national daily Cameroon Tribune.

On March 12, the jailed man asked to talk with his wife Bernadette, also jailed and “I authorized them to go to the disciplinary office to talk. Afterwards, each of them went back to their cells,” says the director. Edgar Alain Mebe Ngo'o returned to special ward 14, with luxury prisoners, while his wife returned to the female ward.

The couple was remanded in custody following an investigation by the Special Criminal Court (TCS), a court set up in 2011 to punish the offences of embezzlement of public funds amounting to a minimum of XAF50 million. Nothing official has filtered on what he is accused of. However, the investigations would focus on alleged overbilling of military equipment with the French firm MagForce, at the time he was minister.

Edgar Alain Mebe Ngo'o has held senior positions in the Cameroonian administration. He was in turn Prefect, Director of the Civil Cabinet of the Presidency of the Republic, Delegate General for National Security, Minister of Defense and then Minister of Transport until his retirement from government on 2 March 2019.