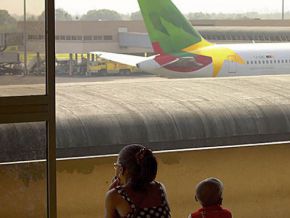 According to certain people, Cameroonian economic capital airport hub cannot receive aircraft because it is under construction.

Douala airport is currently experiencing disturbances. But it has not come to a complete halt as a certain rumour in Cameroon suggests. Indeed, explains the Aviation Authority of Cameroon (ADC) in a communiqué published on 6 April 2017, “Disturbances to traffic will be observed at Douala International Airport from Monday 10 to 25 April 2017”.

According to the same source, these changes will span over two periods. The first phase, from 10 to 17 April, flights expected from 03h59 to 11h 59 local time, will be shifted to midday through 04h the following day. The second phase will be brought back to 04h through 08h and take effect from next 17 to 25 April 2015 in order to allow the continuity of flights.

As a reminder, the repairs that are currently underway at Douala airport started in 2015. This with the goal of finalising work of the runway. It is rather in March 2016 that there was a total stoppage to traffic of aviation companies in activity in Cameroon. All the flights had been reprogrammed to leave from Yaoundé-Nsimalen International airport, located in the suburbs of the Cameroon capital.