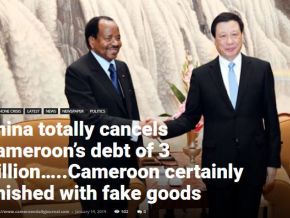 No, Cameroon’s debt to China has not been cancelled

Many online media claim that China cancelled all the debt Cameroon owes it. True?

Some websites claim that China has cancelled all debts owed by Cameroon. According to those websites, the information was provided at the end of the meeting between the president Paul Biya and Yang Jiechi, the special representative of China’s president Xi Jinping on January 18, 2019.

This information is false, the whole debt has not been cancelled. The special representative rather announced the relief of the interest-free debt whose deadline was the end of 2018. This debt amounts to XAF45 billion representing a series of concessional loan agreements between China and Cameroon.

Cameroon is among the top 10 African countries that owe China. Between 2007 and 2018, its debt toward China reached about 5.5 billion. China’s direct investments are made via financial tools like loans and donations granted by different backers, the government, Export-Import Bank Of China, Industrial and Commercial Bank Of China, Bank Of China namely.

Recently, China has become the leading commercial partner of Cameroon. In 2016, the bilateral trade between the two countries reached XAF1,510 billion.

This decision to relieve Cameroon’s debt is not a surprise. It is a promise made to Paul Biya by his Chinese peer during the state visit he made in China on March 22-24, 2018.

This relief is made nine days after Cameroon’s president announced, in his response to the presentation of new year wishes by the diplomatic

corps, his ambition to “pursue an active policy of economic cooperation with China”.