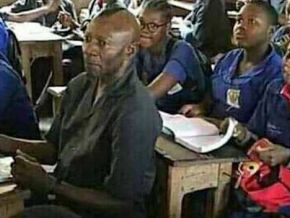 No, Nyangono du Sud has not resumed schooling

Rumors have it that the singer has enrolled in Grade 10 at Biyem-Assi high school in Yaoundé. Is it true?

“This is not an edited picture, Nyangono du Sud is in grade 10 at Biyem-Assi high school,” the caption of a picture being shared online since last week indicates.

In the picture, the singer can be seen sitting amid young students wearing the grey uniform boys wear in many high schools in Cameroon. According to the picture and the caption, the singer has resumed schooling. This is not the case, however.

According to his manager Mista Promo, the picture was taken during the shooting of his clip, which will be officially released today, October 1, 2019, in the evening. The singer confirmed it in a post he made on September 20, 2019, on his official Facebook account. He also posted a 28-second of the said clip and some pictures in which he can be seen signing autographs to students.