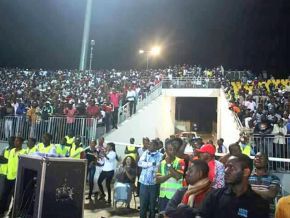 Is it true that the Omnisports Stadium was full for Petit Pays’ concert last Saturday?

Can the pictures showing a massive crowd at the famous artist’s concert be trusted?

Opinions regarding how successful was Petit Pays’ concert at the Ahmadou Ahidjo Stadium last Saturday are plethora and contradictory on social networks. Indeed, while some say it was a success, others claim the event to celebrate the artist’s, Rabba Rabbi as many call him, 30 years of career, was a true fiasco. The second opinion seems to be true as only 1/8 of the stadium was filled. The man behind the “Nioxxer” (1995) track was able to gather only 5,000 people in the stadium which can receive up to 40,000 people. On Saturday, the public waited hours for a show which was planned to begin at 2PM but finally started after 8PM. As usual, the musician made his fans wait. 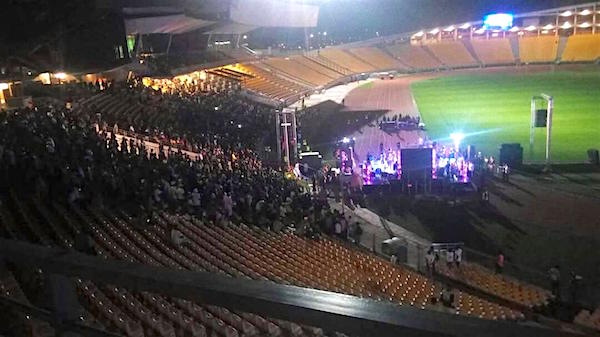 To revive the public whose excitement had been dampened by the long delay, the artist threw in some of his old hits. The near-failed event was due to the lack of appropriate communication. Speaking also about the flop, Jackson Mbozo’o, journalist at Canal 2 international TV, said the “nephew of Jesus”, another nickname by which Petit Pays is known, is well-known by shows’ hosts for his habit of not showing up at meetings to which he has been invited.

“On June 29, Rabba rabbi, who was invited for the 19h50 show on Canal 2 (one of the most watched shows of the channel) came wearing a jogging suit (we thank him for showing such respect to the channel and the viewers)”, says an angry Jackson, in his chronicle “autopsy of amateurism in the Cameroonian entertainment industry”. In the same way, the artist who was expected at the Arène show, same channel, on July 2, at 8:30PM, was once again, nowhere to be seen.

Regarding the recent concert, it is not the first time the artist experiences a flop. Truly, on May 2014, only a few people attended Cameroon’s most famous singer’s concert held at the Palais des Sports of Yaoundé (5,200 seats). Strangely, at the time, it was also to celebrate 30 years of career…