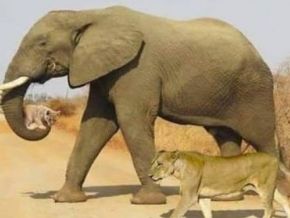 The picture of an elephant helping a lion cub is edited

On social media, a picture depicting an elephant carrying a lion cub and strolling alongside a lioness is being shared. Is the picture real?

A picture depicting an elephant carrying a lion cub and walking alongside a lioness surfaced on social media recently.

“It is seen as the best picture of the century. A lioness and its cub were crossing the savannah but the cub was tired. An elephant which noticed that the cub was dying carried it to a puddle walking alongside the lioness. Despite this, they are called wild animals,” the caption read. The image moved many internet users.

However, it is an edited picture published as an April fool on April 1, 2018, by Kurger national park in South Africa. According to to20minutes.fr, it was created by South African Nadav Ossendryver, creator of "Latest Sightings," an app that lets people take part in a safari to share their wild animal sighting in real time.

“Latest Sightings allows sharing discoveries in real time ; it is, therefore, a serious thing. However, April 1 is the only day when we can make a prank for the community,” Nadav Ossendryver said. Only the elephant was on the original picture.