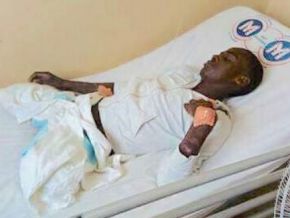 It is said that Ibrahim Bello escaped mob justice

Did this young man of 17, maimed in 3 limbs in Ombessa, incur the wrath of the inhabitants of this town?

The Ibrahim Bello case is still being talked about in Cameroon. This young man whose legs and fingers on the left hand were amputated by yet-to-be identified torturers, set off a surge of empathy in the general public. The root of his torture is still not clearly established.

However, one fact is now known for certain: Ibrahim Bello was the victim of mob justice in Ombessa (close to Bafia, Central region). He apparently tried to steal the car (Carina E) of a local “court officer”. It was this person who alerted the neighbourhood. Mr Bobiokono, member of a team of investigators from the National Human Rights and Freedoms Committee (CNDHL), revealed that Ibrahim Bello found himself at the police station pushed by the mob and the owner of the Carina E.

In a much-shared Facebook post, Christophe Bobiokono, who also happens to be a journalist and crime reporter, emphasised that “Mr Bello walked into the police station on his own two feet on Sunday 5 February 2017 led by a mob who had just beaten him under the directive of the owner of the car, who immediately filed a complaint”. In other words, the young man’s maimed limbs are not the consequence of the mob's justice.

While awaiting the final and official report from CNDHL, many grey areas persist considering that for the moment, the main victim cannot give his account of events.