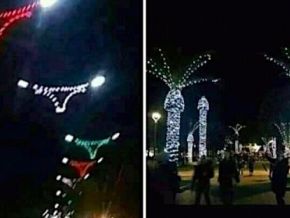 No, these photos were not taken in Cameroon

Don't believe everything you see on the Internet

Rumors suggest two photos showing Christmas illuminations made in the shape of panties and a penis were taken in Cameroon. People on social media say the pictures were taken in Yaoundé, which is actually wrong.

A reverse image search on Google revealed that the first photo (showing panties) was first posted on September 14, 2018, on the Facebook pages and profiles of Arab users. The author claims it was the decorations of the Damascus International Fair, in Syria. Another user suggests the photo was taken in Yemen, in the streets of Ma'rib. Anyway, there is no evidence that the picture was taken in Cameroon.

Regarding the second photo, the results of research reveal that it was taken in Italy, in the municipality of Civitanova Marche as it can be read here.