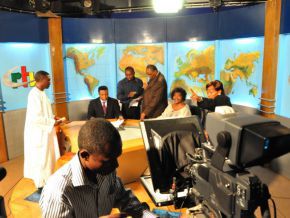 Is it true that there is no executive from the English-speaking regions at the Crtv ?

Last July 3, as new executives of the public broadcasting channel Cameroon radio & television (Crtv) were taking office, the channel’s Managing Director (MD), Charles Ndongo, talked about the issue of Crtv having none of its senior executives coming from the North West and South West.

“For the first time ever, four out of the 10 station heads are from the South and North Western regions. Amongst the three central directors, one is from the North-West, another from the North, and the third is from Grand Sud,” Ndongo said. According to the MD, 144 people produce content for the broadcasting channel, 269 at the television department of which 99 journalists and radio producers and 125 at TV solely.

M. Ndongo added that all regions of the country have their representatives at Crtv. "Even the Eastern region which could have felt frustrated following the first wave of nominations, got satisfaction after the second," he added.