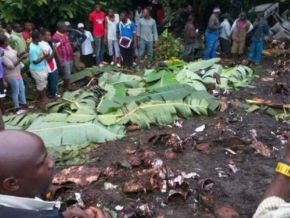 No, a human trafficking network has not been disbanded in Boumnyebel

Rumors suggest that a human trafficking network was disbanded in Boumnyebel. True?

Since September 1, people have been sharing on Facebook shocking images of dead bodies covered with banana leaves or carried by policemen. Images were captioned “a big human trafficking network was disbanded this morning at around 9am in a bush in the city (Boumnyebel). There are 17 dead bodies (several babies)”. The situation quickly raised concerns among Internet users.

In reality, these images featured the scene of an unfortunate accident that occurred on August 19, 2017. According to one of the blogs (Bontehsblogs) that reported the accident at the time, it occurred on Buéa-Kumba road, at about 47 km (29 miles) from Muyuka, when a 30-seat bus was hit by a truck, killing 20 people instantly.

With regards to the reliability of the widespread message on human trafficking, it is nevertheless bizarre that such information has not been relayed by any traditional media source in Cameroon.

Video of the events: https://bit.ly/2PEX2iB [viewer discretion is advised]