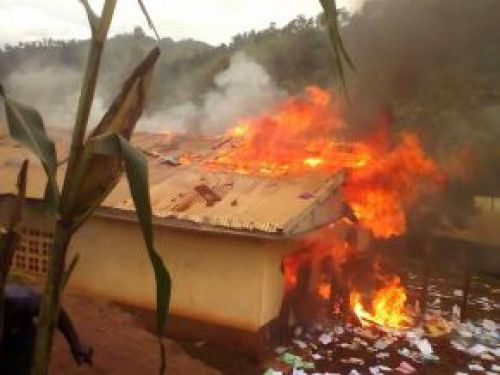 Was the Kumbo city burning on Monday?

It is said that on the day school reopened, some people burned administrative buildings

Many testimonies claim that the town of Kumbo, in the English part of Cameroon, is actually militarized amid school reopening. Indeed, some even claim that there was a conflict that opposed instigators of the “ghost town” movement and law enforcement forces.

Many flyers warning parents about these have in fact been circulating, advising not to send their students to school in this region. Following the conflict, many casualties were numbered including a 16-year old boy. The rumor however differs from the government’s that commented the event in a press statement signed yesterday. The deputy minister of Defense informs that the conflicts actually result from an “unfortunate incident during an anti-drug operation that took place on September 4, 2017, at Kisem, department of Bui, in the North Western region”.

The minister said some local police officers tried to fight back some armed civilians that attacked them. In truth after one of their colleague was injured, police officers started shooting locals, and killed a civilian.

Subsequent to this, the people started attacking administrative buildings. This explains the pictures depicting a building in fire shared online.

Let it be recalled that the English-speaking regions of Cameroon, knowingly the North West and South West, have been experiencing a political crisis since November 2016.