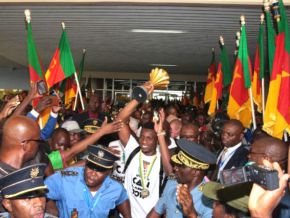 Claims are that the tour which ended last Friday in Mbalmayo required this budget. True?

Everyone is speculating on the budget figure for the national tour of the trophy won by the Indomitable Lions during the recent African Cup of Nations (AfCON).

In order for the cup to tour the main cities in each of the ten regions, some people announce a total budget of 450 million. For others, the State planned 500 million. Actually, “the overall amount of expenses could go beyond a billion”, we learn from Gabriel Nloga, Head of the Communications Unit in the Ministry of Sports and Physical Education (Minsep).

To get theprecise overall budget, he underlines, one must assess everything that this tour has required in terms of logistics, human resources, etc.

Mr. Nloga confided that the financial assessment will be done at the end of this week. The Ministry of Sports was not alone in being responsible for the national trophy tour. The Ministry in charge of Defence contributed for security, aircraft, among other things.

Gabriel Nloga insisted that several agencies helped. As good as saying that impatient people should have waited for the real budget at the end of the tour...