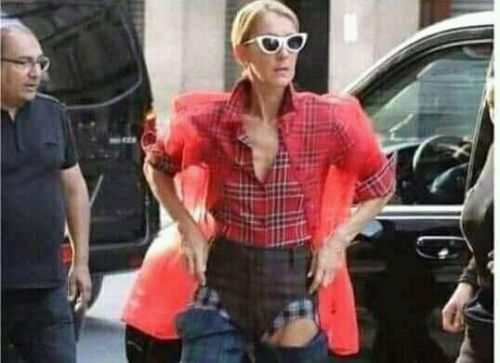 No, Céline Dion is not going crazy

Based on her clothing on this picture, some social media users claim that the diva is mentally ill. Is it true?

A picture of Céline Dion wearing colored and overlapped clothes is being greatly discussed by Cameroonian social media users. For some of them, this clothing shows the madness of the Canadian diva who lost her husband in 2016. Even though the clothing in this picture is laughable, the singer is not mad, others say.

"It looks like someone who dressed up during power failure at night taking clothes from seven different wardrobes," Mario Tessier, Canadian humorist, wrote on Twitter.

This cloth is one of the high fashion outfits worn by the Canadian singer during the Fashion Week Paris 2019, held from June 30 to July 4, 2019. Being a regular participant of this fashion week, Céline Dion always amazes with her bold outfits.

"It is now a fact. When Céline Dion is in Paris for the Fashion Week, the fashion show does not happen on the catwalk but at the entrance of her hotel. She is THE fashion show. For many seasons now, she has been overshadowing It-Girls and showcasing the most ingenious designs," ELLE wrote on its website.

Many French and English websites discussed the outfit.