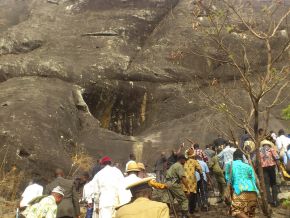 A legend says that this ethnic group are descendants of Pharaohs from ancient Egypt. True?

The legend tells that the forefathers of ethnic group Bassa’a-Mpoo-Bati lived in ancient Egypt around the 10th century. And that later on, to escape their numerous enemies, they crossed countries and seas to end up in a mysterious cave, today called Ngog Lituba in Cameroon. They rushed into this shelter that a spider quickly closed by weaving a giant web. The Bassa’a pursers thus passed by without suspecting their presence. This myth has since become the basis of the link between the Bassa’a-Mpoo-Bati people (gathered in the Mbog Liaa association) and the Ngog Lituba cave (photo). The president of the association Mbog Liaa, Jérôme Minlend, explained that the Bassa’a-Mpoo-Bati are “viscerally attached to this site in a mythical and mystical way”.

The custodians of the oral tradition called “Mombog” are in charge of continuing the myth on the Egyptian origin of the Bassa’a. “If some archaeological excavations were undertaken, they would show, without a doubt, the traces of this former civilisation that a meteorite partly destroyed”, believes Mbombog Mbog Bassong. He adds that the Bassa’a-Mpoo-Bati “co-existed since the Egypt of Pharaohs where they were part of the sacerdotal clergy (scholar priests), based on the important recovery rate when reviewing the name of Egyptian gods in the languages and ideas of this community”. Some historians specialising in Egyptology defend this position. While we wait for this to be universally accepted, everyone is free to believe… or not.