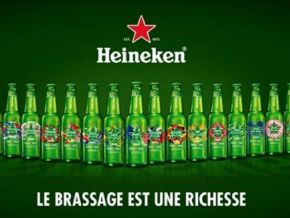 It is true: there are Heineken’s bottles with Cameroon written on it

This image is being shared on Twitter. Is it a genuine image?

An image of Heineken bottles with Cameroon marked on them and illustration bearing the colors of the country are shared on Twitter. These images are not edited. This bottle was conceived with 19 others (with the colors of UK, Brazil, Belgium, Canada, Spain, The US, France, Greece, India, Japan, Kenya, New Zealand, the Netherlands, Peru, Poland, Portugal, Russia, Sweden and Vietnam) as part of the Heineken’s 2018 limited edition for Heineken France.

The campaign around this edition was called: cultural mix is wealth. To illustrate this cultural mix, Heineken France invited 20 artists from different cultures most of whom are living in France. The bottle with Cameroon on it was conceived by a Cameroonian Neils Niat, born in Paris and actually living in Bruxels where he is an architect and illustrator.

Neils Niat was known on social media for his illustrations where he shows his passion for artwork. He was mainly known for his project “The Story Between the Lines” (black and white artworks essentially) which represent daily scenes which were inspired by his stay in Cameroon.

The inquisitive eyes can find the different illustrations for this year’s edition and their authors on Heineken’s digital platform here.